Martínez Lacuesta From the 19th to the 21st century

More than simply a building, a winery represents a journey through the past, the history of the wines and the brands that have been produced there. The point that we have arrived at, all that we see today, isn’t only an insight into current techniques but rather evidence of the path we have taken to get here. A path that represents evolution.

The French influence can be seen in the first wines produced by the winery in Calle de la Vega. In the style of the intensely coloured, “open” wines from France such as its Clarets, Martínez Lacuesta produced its Clarete Selecto (generally a young wine from that year’s harvest) and its Claretes Finos, which had spent two, three and four years in the barrel. These were preludes to the current Crianzas and Reservas were sold in either casks or bottles which, from the third year onward featured hand-crafted wire mesh.

Other wines “in the French style” were produced, such as the Superior Estilo Borgoña and the semi-sweet Sauternes. Nevertheless, Riojas in general and the Martínez Lacuesta family in particular, were realising that the personality of the region’s wines should forge a different path.

The Martínez Lacuesta family began to realise the full value of the La Rioja vineyards. New techniques in both the field and the winery highlighted the fact that the new Riojas had begun to stand out on their own merits.

Campeador was the first Martínez Lacuesta wine with a distinctive name that differed from that of the family. Initially it came from a méthode champenoise wine from 1917, although four years later Martínez Lacuesta began to sell wines that were showing a markedly different character, exclusive to Haro and the surrounding area, under the Campeador brand name. Moving away from the French influence, there began a search to define a singularly Rioja identity.

That first Campeador was produced from a coupage of Tempranillo with Garnacha from the Rioja Baja region. Consequently, wines began to be marketed that had their own distinct character. Pure Rioja.

Manual decanting
Demonstration for a group of students from the Oenological Station. Gravity and decanting
allow drawing off the wine
without movements.

INNOVATION AT THE BEGINNING OF THE 20TH CENTURY

The winery’s founders were always concerned with improving traditional techniques, including those that had been “inherited” from France, making it necessary to adapt them to the particular nature of La Rioja’s vines.

The proximity of the Haro Oenological Station meant that it was possible to improve vineyard conditions and prevent diseases, subsequently adapting winery processes to the special characteristics of the local grape varieties. Inside Bodegas Martínez Lacuesta, wine makers experimented with the use of egg white to clarify the wine (a new technique at the time, which today has been replaced by plant-based clarifying agents). The most significant development was opting for a system of gravity decanting by hand that is still used today.

The year is 1937. The drinking of this delicious aperitif has become increasingly commonplace. Martínez Lacuesta began producing vermouths using a technique that was seen as ground-breaking in La Rioja.

However, despite the popularity that Vermut Lacuesta has enjoyed since it was first produced, the restlessness experienced by foregoing generations returned, with its habitual pioneering spirit coming to the fore once again in 2005. Martínez Lacuesta produced its first Vermut Reserva, a new take on a classic tradition. Nevertheless, this was not the end of the story. Traditional oak casks were joined by new acacia barrels, accompanied by a longer ageing processes. Once more, the signs of an evolution toward a new identity were becoming evident of time. 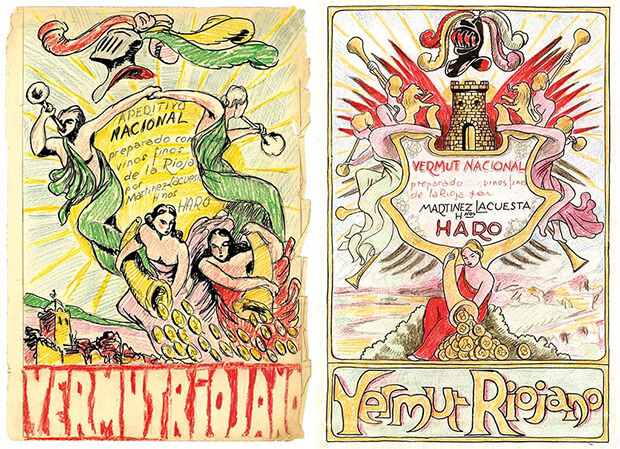 Laokin
Sketches by the famous illustrator Laokin from 1937 for labels adorning bottles of red vermouth.

The infinite method An evolutionary path

Times change, and wines and people change with them. Claretes Finos and Estilo Superior Borgoña gave way to wines that were much more structured that had aged for considerably longer. Rioja wines were ready to take the leap forward toward a new level of quality.

Tastes and traditions were maintained for most of the 20th century. With the changing times, consumer tastes and market trends also shifted. The preference for well-rounded and balanced wines remained, while fruitier tones became more common, even after long ageing periods in casks. Consumers sought out new sensations without wanting to turn their backs on those traditional wines that had become classics over time. The Martínez Lacuesta family had plenty to say with regard to this new chapter to the story.

The current winery The birthplace of great wines

Martínez Lacuesta’s new facilities are an excellent example of the combination of technology, space and effectiveness. Current production levels require spaces that can be adapted to new needs, without forgetting the path that has led us here.

With this in mind, the winery is designed to maintain the techniques that ensure the singular character of our wines while also accommodating the latest developments. Manual decanting required a gravity-based winery. Our technique of stacking wine casks five barrels high makes spectacular ageing room necessary, while our most emblematic vintages have to be stored in racks that our worthy of their status. All this without ignoring our origins, the path we have taken, our history and our evolution which are on display to visitors in our small museum.